To make the evening even more special, Del Langdale custom made this simply incredible floral arrangement for our table! 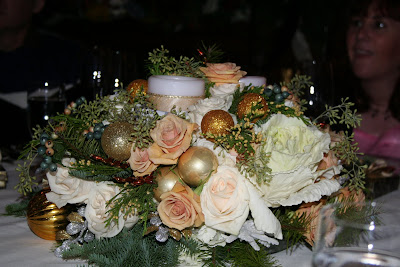 Part my wonderful evening was a beautiful gift created by Del Langdale, former Disney cast member and designer. Del made these beautiful snowmen cookies by hand and you can see the mouse ears! Wow, we just loved them but they were simply too cute to eat. 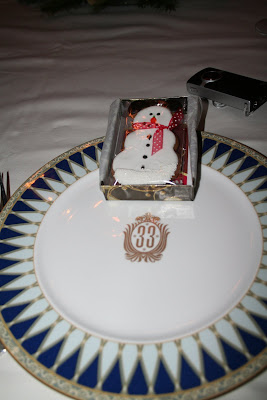 The good Doc enjoys time with this close friends! 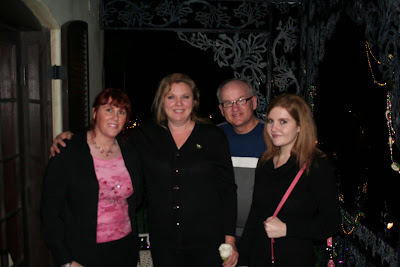 Dr. Lee enjoying a holiday dinner with friends at Club 33

I was so grateful to have been invited to return to my old stomping grounds for a beautiful holiday dinner with my friends. We had the most lovely evening, terrific wine wonderful food, and yes, the butternut squash bisque is back on the menu for Winter months. Wow, it's the best! If you're looking at my attire and thinking, 'hmm, shouldn't he have a collared shirt?'. Well, the answer is yes and I was told to be more cautious of the dress code. My advise, if you're going to the club, be sure to check the dress code! I love the ol' club and look forward to dinning there again real soon (with a collared shirt!). 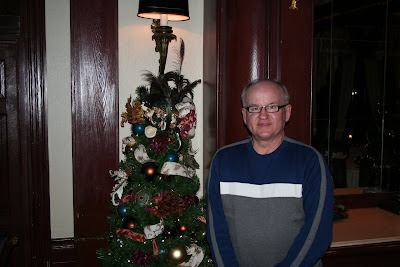 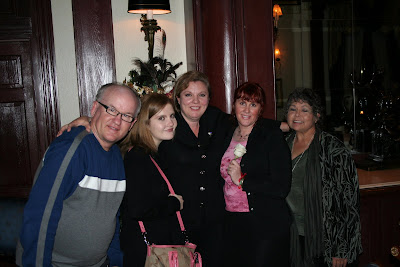 My dear friend Rosie! She's a special education teacher and the sweetest person you'd ever hope to meet! 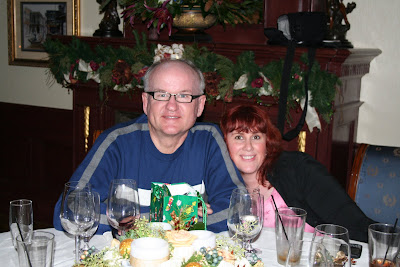 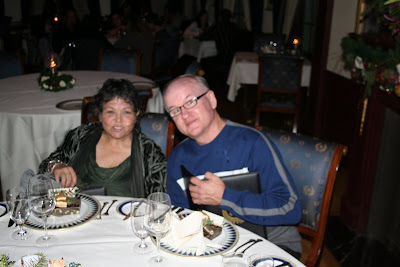 To make you laugh:

Why did Mickey Mouse buy a Telescope......

So he could find his friend Pluto, Ha-Ha

Walt and the opening of New Orleans Square! Great Video!

First of all, to all who visit and read this site or blog, Happy Holidays!

Again, thanks to everyone and again, "Happy Holidays"!!!

Did you know?
...Vinymation draws its inspiration from the heart of The Walt Disney Company- storytelling and animation. The root word are Vinylmation is vinyl+animation.

...Local Southern California artist Noah has been a staple of D STREET, from opening day to "World of Color" and, recently, Tron: Legacy.

...More than 1 million Vinylmation figures have been sold across domestic Disney parks.

This month, Disney's Paradise Pier Hotel marks 15 years as part of the Disney family. This 15-story building was originally owned by a Japanese company and had been called the Emerald of Anahiem and, later, the Pan Pacific Hotel. In 1995, The Walt Disney Company purchased the hotel and renamed it Disneyland Pacific Hotel, and in 2000 the hotel was given a boardwalk theme and renamed Disney's Paradise Pier Hotel to complement Paradise Pier in Disney California Adventure Park.

"You can dream,create,design and build, but it requires people to make the dream a reality."

On Dec. 5,1901, Walt Disney, one of the founders of The Walt Disney Company, was born in Chicago, III. After a childhood spent in Marceline, Mo., his career led him to Hollywood. His legendary work earned 32 Oscars-more than anyone to date- and countless other awards and accolades.
Walt was a man persistent on achieving his dreams, from a theme park to ground-breaking animation he was truly one of the greatest creative minds of the 20th century.
Although Walt has been gone nearly 45 years, the legacy of the man who gave the world Mickey Mouse and Disneyland continues to live on through the dedication and passion of all of those who work for the Walt Disney Company.

" All your dreams can come true if you have the courage to pursue them."

" Whatever we accomplish is due to the combined effort."

" I think by this time my staff, and young group of executives are convinced that Walt was right. That quality will out. And so I think they're going to stay with that policy. Give the people everything you can give them. Keep the place as clean as you can keep it. Keep it friendly, you know. Make it a real fun place to be. I think they're convinced and I think they'll hang on after... well...after Disney."

On Monday afternoon, Oct.3, 1955, a generation of American kids raced home from school, plopped down on their living room floors and waited for their black-in-white TV sets to warm up so they could watch a new show. It wasn't the first kids' show on TV,but they knew this one would be different.

It isn't an exaggeration to say that " The Mickey Mouse Club" forever altered American pop culture. Walt Disney already had the cartoons and animated films and had opened a big amusement park in Anahiem only a few months earlier. But the addition of TV to the corporate vision put a lock on the hearts and minds of American kids that holds fast to this day. For a couple of hundred folks who braved Saturday's bluster to visit the Walt Disney Family Museum in the Presidio, time hasn't stood still, but it hasn't faded from memory either.

Bobby Burgess, Carl "Cubby" O'Brien and Sharon Baird were among the small group of "kids next door" who became the first teenage idols of the TV generation. They may be a bit older these days- Bobby and his wife of 40 years,Kristie, just became grandparents of twins- but they remember their time on the original "Mickey Mouse Club" as if it were yesterday.

There were actually 39 Mouseketeers from the first incarnation of the show, from 1955-58. The host was actor Jimmie Dodd, who wrote many of the songs, including the show's theme song. He was assisted by the show's "Mooseketeer," a burly animator named Roy Williams, who came up with the idea of hats for the kids fitted with Mickey Mouse ears.

Bobby Burgess, among the show's standouts because of his dancing skills,swoon-worthy head of thick hair and constant grin, never really liked wearing "the ears" as he and others still call the hats.
"We had high pompadours in the 50s," he told the Family Museum audience. "And the ears always messed up your hair."

The Mouseketeers themselves became, as Sharon put it, "like a second family,"and we still keep in touch. As kids, Sharon and Annette Funicello were best friends and remain close contact today. Inevitably, the audience wanted to know how Annette was doing and Sharon, who'd seen her in September, was happy to report that her friend, who has multiple sclerosis, remains "as beautiful as ever on the inside and the outside."

Saturday's program included video of the show's opening, still photos of the kids and a clip from the time Cubby played the drums on the show along with his dad, Haskell O'Brien, and older brother Warren. Cubby had started out in the show's Talent Roundup portion but was quickly elevated to the front of almost every group shot you'll ever see of the Mouseketeers, once the show's directors realized he'd pair well with Karen Pendleton.

While some of their cast-mates have had their ups and downs, most of the Mouseketeers have avoided the kind of scandal that seems to dog many pop stars today."My dad was a meatcutter," Bobby says,adding that he grew up in Long Beach, where his family remained even after he became famous on the show.

All remain active in show business. Bobby was not only a regular on "The Lawrence Welk Show" for 21 seasons but is also now hosting the just-renewed reruns that show up in syndicatuion on PBS. He also teaches ballroom dancing at Burgess Cotillion, which he and his wife have operated in Long Beach for nearly 25 years.

Sharon worked in childern's TV for years. Her small stature made her perfect for wearing animal costumes in shows by sid and Marty Krofft,among others, and she was an onstage assistant to the melon-smashing comic Gallagher for a while. Today she is semiretired and lives in Reno, where she does nails at a salon.

They were no longer kids when Walt Disney died in 1966, but still felt like a death in the family. Sharon was working in Elko, Nev., with her ex-husband and another man in a revue called "Two Cats and a Mouse." When she heard the news about Walt Disney's death, she "cried for hours," she said.

Bobby had had a chance reunion with his mentor only a few months earlier. He happened to be hiking near Devils Postpile National Monument when, coming towards him on the trail was an older man with his head characteristically looking downward. "Mr. Disney?" Bobby saided. The man looked up at him and said, "Mouseketeer Bobby."

Mouseke-tibdit: The Mouseketeers weren't allowed to keep their costumes or ears, but Cubby is said to have the biggest collection of memorabilia,including , he said, "Cubby and Karen (Pendleton) cut-out dolls.

Bobby has copies of all the Disney movies and, as a kid, named his dog Bambi.

Bobby once got out of a speeding ticket in Los Angeles when the cop recognized him and said he'd let him off if he told him about Annette Funicello.

Host Jimmie Dodd wrote most of the music on the show, including the opening march and the slower-tempo version that closed the show: "Now it's time to say goodbye to all our company. M-I-C- See ya real soon-K-E-Y- Why? Because we like you -M-O-U-S-E."